The Rocket League Championship Series (RLCS) has created countless memorable moments, but as the esport grows each season, the RLCS needs to follow suit.

RLCS X will represent the most fundamental changes to the RLCS since its inception in 2016. On top of a huge $4,500,000+ overall prize pool, we're making sweeping changes to the league and its structure to build a foundation for competitive Rocket League for the years ahead. RLCS X represents our first step toward a brand-new vision for the RLCS. 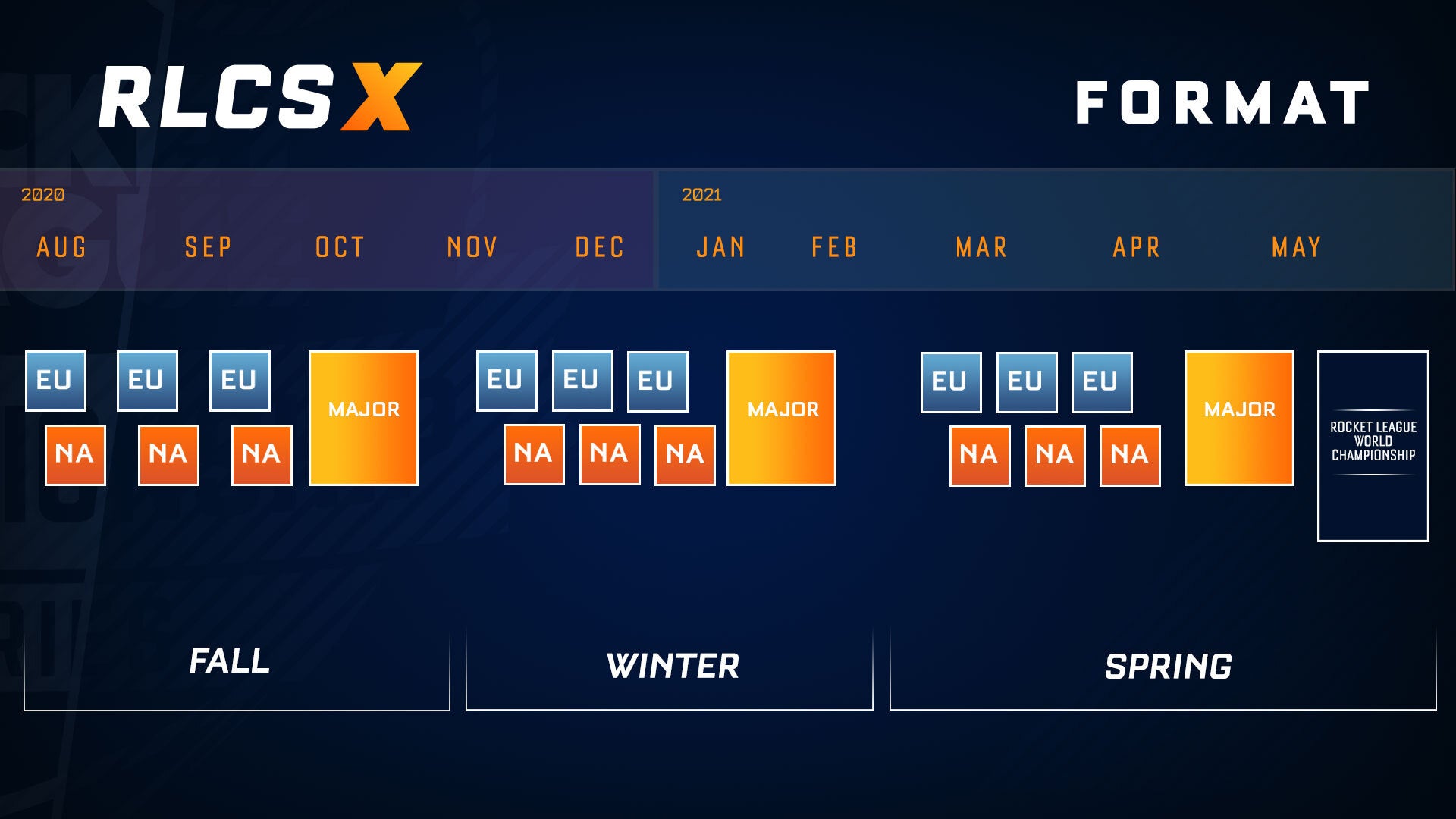 Let's begin with how we're changing the RLCS. We're moving away from the League Play format and bi-annual seasons. RLCS X will be an open event-based circuit format that culminates in an annual Rocket League World Championship. We believe this format strikes a healthy balance between open competition and rewarding consistent, high-level performance. It also gives us the flexibility to continue to award points towards World Championship qualification if live international events are not possible during the season due to world wide health concerns.

Let's break down what RLCS X will look like:

As mentioned above, each Split will showcase its own format. Here's a look at what you can expect from the Fall Split. We'll reveal additional details about the Winter and Spring Splits later on.

We're working with South American and Oceanic tournament organizers to create their own circuit of events that will serve as official pathways to Majors and the World Championship. They'll have their own point systems and their prize pools are being increased across the board. More information will be available soon.

Another big change to our competitive ecosystem is The Grid, a new weekly tournament circuit that brings top teams together to battle for Grid Points, prize money, better seeding, and a spot at the Majors. The Grid was inspired by the motorsport concept of 'starting grids,' and this league reflects that philosophy, with results informing RLCS Regional Event seeding and qualifying top-performing teams for RLCS Majors.

Here’s how it works:

We're also opening up The Grid broadcasts to allow individual teams to stream, making it easy to follow your favorite team's run. We’ll share more details on this as we get closer to the start of The Grid.

RLCS X is our first step towards a new, exciting way for players and fans to experience professional Rocket League.

Battlefy's expertise will help us deliver a better tournament experience while also tracking results, points earnings, and more in real-time. In fact, you and your team can head over to our landing page and sign up RIGHT NOW on Battlefy before the deadline on July 24 at 10 a.m. PT (5 p.m. UTC)! So, get to practicing and don't miss your shot at competing in RLCS X.

We'll have more information to share as we get closer to the season so stay tuned to Rocket League Esports on Twitter! But, in the meantime, make sure to assemble your squad and sign up today. We'll see you on the RLCS pitch!