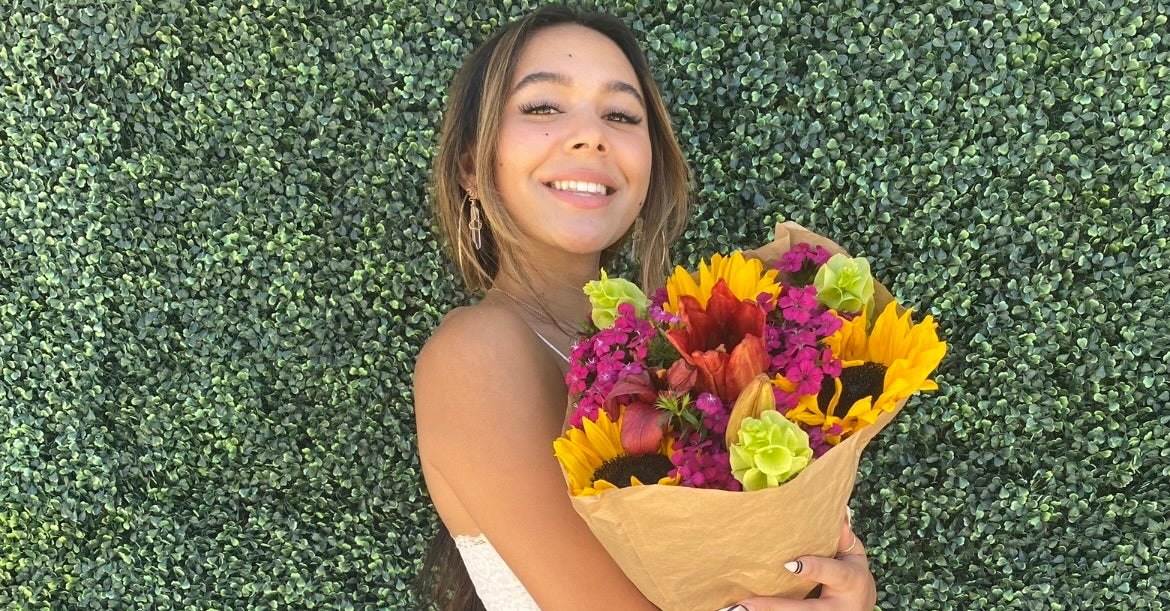 If you follow Rocket League content creators, chances are you know Chell. Or, at the very least, you may have seen her dog, Apollo, who went viral last month when he became the first dog to score a goal in Rocket League! Chell has amassed over 200,000 followers across her numerous social media accounts since she started streaming six years ago. But, what isn't always clear in her streams or video posts is that Chell has been juggling streaming and schooling over that same amount of time. But, there's an end in sight and she can finally focus on content creation.

Despite graduating high school early at 16, Chell has still been in college for the past six years. She says she had a tough time throughout school and was often thought of as an outcast while growing up in a small town in Northern California. Chell's home and upbringing put an emphasis on Japanese traditions, and her grandmother got her interested in manga and anime at an early age. Chell says that made it tough to fit in.

"I didn't have many friends and kind of got bullied a lot," Chell recalls. "From second grade to fourth grade, I wore cat ears every day [laughs]. I was just a weird kid. I was really into showing off the things I liked, and didn't realize how to be cool. Looking back, it's so cool my grandmother got me into that stuff, but school was pretty rough."

It didn't improve as she got older either. Chell had two close friends who both moved away while she was in high school, leaving her by herself in an environment she described as hostile.

"One of my friends was asked to leave the school after getting into a fight, then the other left," she explains. "So, everyone hated me because my friend got into a fight! It was all bad. I told my mom I needed to switch schools, so my mom looked into the California Proficiency Exam."

The exam would allow her to test out of what was left of her high school education. Chell performed well enough on the exam and was able to graduate early, but she still wasn't sure what she wanted her career path to be. There was one passion that she was sure about: video games. Chell got into video games at a young age thanks to her older sister who worked at GameStop. She grew up on games for the Nintendo 64 like Mario Kart and Hey You, Pikachu. Her interest in video games and vlogger show iCarly made Twitch streaming a logical step in her life. 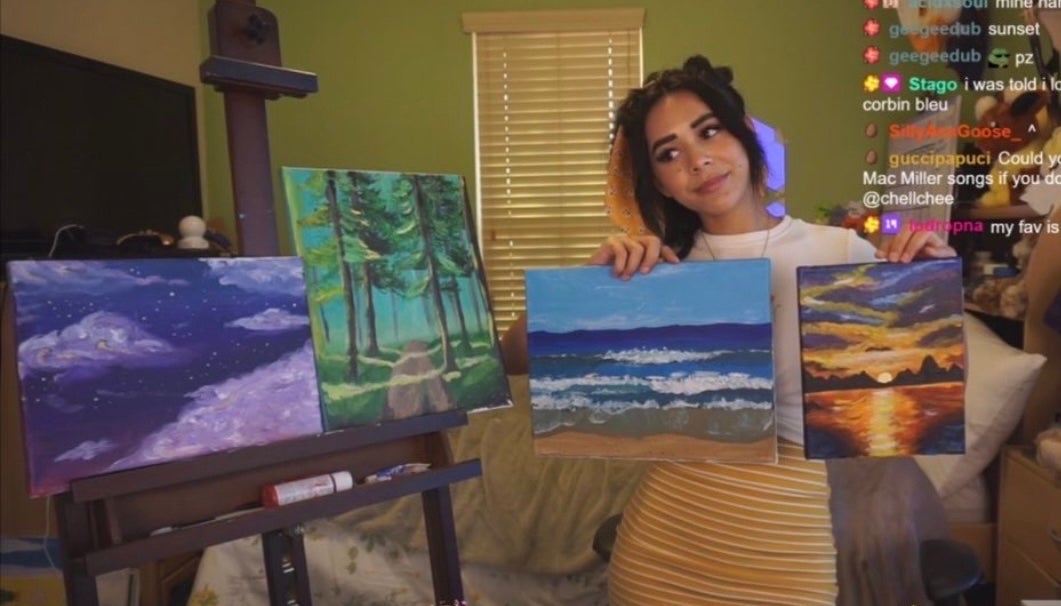 Chell does more than play games on stream. She also paints and bakes.

"It's sort of cringe, but I liked iCarly a lot growing up and would think about doing something like that," Chell said. "I didn't really expect to do something that put a lot of attention on me. I honestly streamed because I was lonely. I didn't have any friends at the time. I was watching streamers like Valkyrae and how her community was so welcoming. That's what I wanted for my community."

At this point, Chell was 18 and finishing up her general education in junior college before deciding what to focus on. At first, she thought she had her whole education planned out. Chell wanted to study speech and language pathology, transfer to a different university to get her bachelor's degree, and eventually get her master's degree. But, this is the same time she discovered streaming and that her passions lied within her newfound hobby. Chell transferred from Cal Tech East Bay to online schooling so she could more easily manage streaming.

Chell started out streaming games like League of Legends and Call of Duty testing out the online waters, getting more comfortable on camera and trying to build an audience. This was a process that took time. Chell says she struggled with consistency and with the toxicity that can come with being a woman on Twitch.

"I only started making money from streaming after about two years of doing it," Chell says. "I struggled a lot with consistency. I didn't know how to monetize my content or how to utilize different platforms other than Twitch. I compared myself to other people too, which never helps. I didn't know if I wanted to be an entertainer, or try to get really good at games. Then, when I was starting out I had to deal with hate comments and toxicity. I was used to people being mean to me behind my back, but not in my face [laughs]. I had to accept that people just talk crap on the internet and try to hurt your feelings, but you get over it. You realize they don't know you, and just let it roll off your shoulder. I think streaming has turned me into a callus [laughs]!"

Chell decided to focus on Rocket League shortly after launching her stream. She had played it when it first came out, but it was just a party game to her up to that point. Then, she discovered RLCS and the community. That's when Chell started streaming it regularly.

"Once I saw people going for aerials and stuff, I was hooked," Chell explains. "I remember thinking that's what I wanted to be able to do. Then I just started grinding Ranked on my streams regularly." 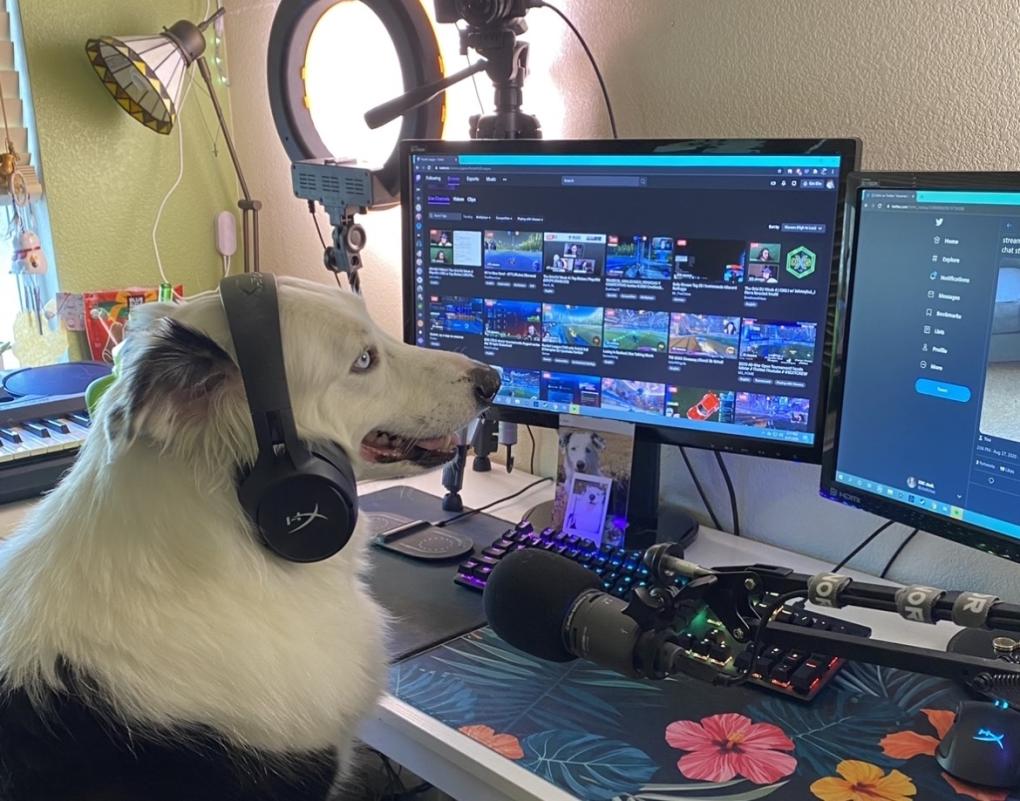 Over time, Chell built a following on her Twitch channel, started bringing in income, and branched out to other outlets like Instagram, TikTok, and, of course, Twitter. She wanted to change her education to something that would help her online presence and landed on integrated marketing communications. She's scheduled to finally finish higher education this August and become a full-time content creator for the first time in her life. Until then, she's juggling school work and streaming like she always has.

Chell keeps those two parts of her lives very separate. Nobody at school knows that she streams or has any noticeable online presence.

"I don't tell anyone about my stream," Chell laughs. "I get so spooked that someone is going to find out. I'm Chell online and my real name in college, but I would even turn off my last name there if I could."

Chell is still undecided about her career path once she graduates. She's excited about the thought of becoming a full time content creator without the timesink of school filling up her schedule, but she's tempted by the stability of a traditional job. Chell says she's mostly motivated by her dogs. The dream is to move away from the town where she grew up, and get a big house with a big yard where her dogs Apollo and Blue can run around whenever they want.

"Knowing how people treated me in high school, I want to close this chapter in my life," she says. "I want to meet friends online who have similar interests, who are making new communities rather than be around the people who bullied me. It's a little too painful."

For now, she's excited by the prospect of being able to dive into content creation fulltime and see where her channels can go from there. In the past year, Chell has produced content on her Twitch and YouTube channels that range from ranked grind, to her dog scoring goals, and even some content with her boyfriend and NRG pro GarrettG. It doesn't stop at video games either. Chell even occasionally bakes and paints during her streams. Stay tuned to see where her channels go after graduation on her Twitch, YouTube, TikTok, Instagram, and Twitter.

Chell would like to thank her friends Athena, Kiaa, Mel, GarrettG, and her family for always supporting her.